Why Wales should make a bid to host the World Expo

What better way to signal to the world that we’re open for business than inviting the world here to see for themselves?  Assembly Member Adam Price makes the case in today's Western Mail for Wales to host the World Expo. 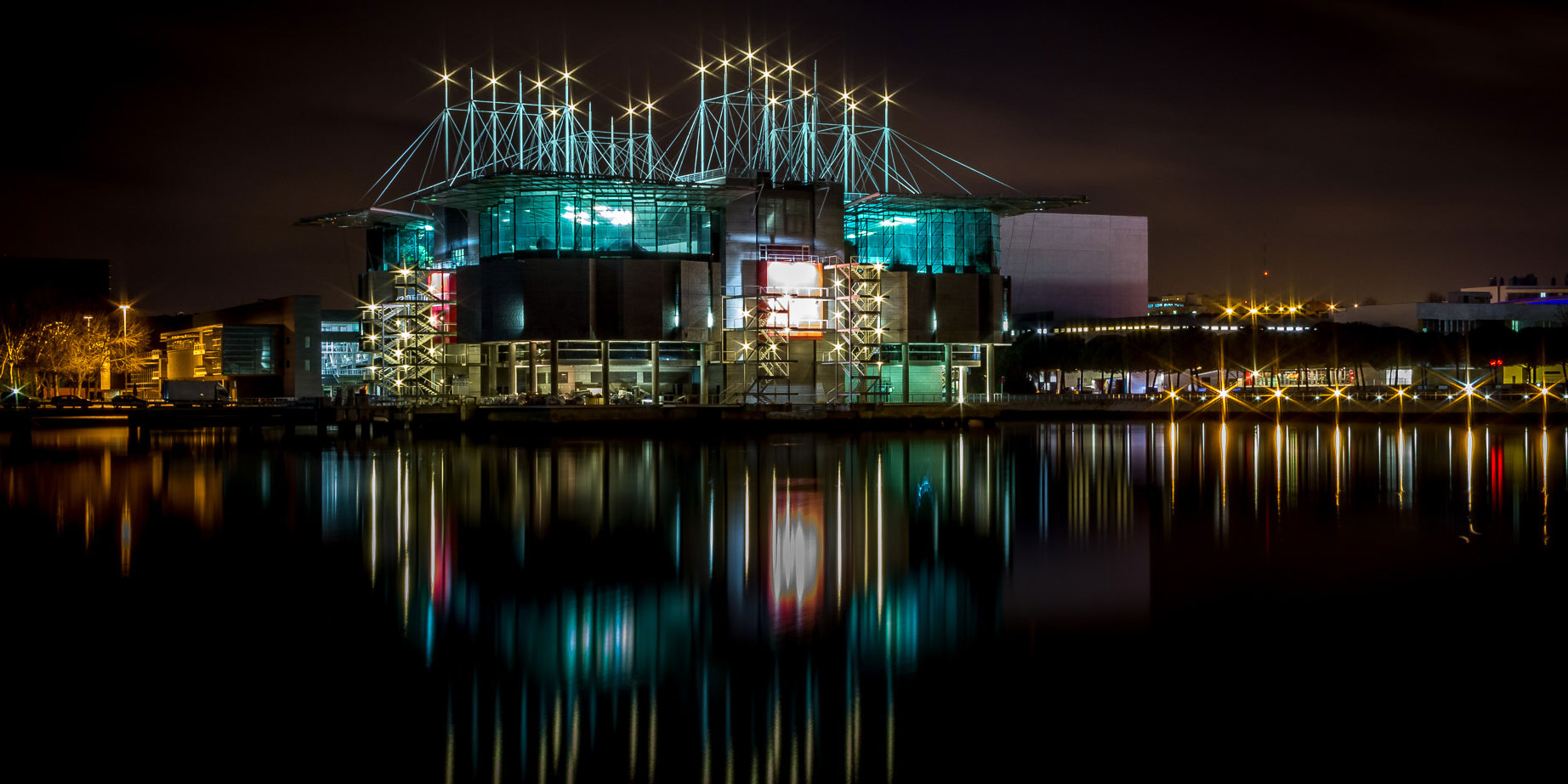 The World Expo – or World’s Fair to use it older, more poetic title – has over the 165 years of its existence been a vast global stage on which many an invention has made its debut: from the telephone to the television set, from X-Rays to the Ferris Wheel. But it has also served as a platform for cities, regions and nations to reinvent themselves. Could it work for us in Wales?

Expos are to the economy what the Olympics is to sport. Countries and companies from across the world set out their stall in specially designed pavilions which represent their response to the Expo’s particular theme. Lasting months not weeks, they attract tens of millions of visitors making the Expo the biggest event on the planet. As with the Olympics, they happen at regular intervals – every five years for the main event, with a smaller, specialised Expo in the years between (the Expo’s equivalent of the Winter Games, though it’s also held over the Summer months). The parallels in the process are almost exact. Cities make bids and countries that are members of the Bureau International des Expositions vote to choose the winner.

Though the Expo has its roots in the UK – the first of its kind was London’s Great Exhibition of 1851 – the UK hasn’t held one for a hundred and ten years. The UK Government’s announcement then that it would support a bid for 2025 was already big news but post-Brexit it’s assumed an even greater symbolic significance. What better way to signal to the world that we’re open for business than inviting the world here to see for themselves? So far only Manchester has said they are definitely bidding – London has ruled itself out – which makes last week’s announcement by Ken Skates that he’s asked his officials to scope a Welsh bid one of 2016’s rare examples of positive news.

Used intelligently, the Expo can be transformational. Expos in Montreal (1967), Vancouver (1986), Seville (1992) and Lisbon (1998) launched their cities on the global stage, turning them from forgotten backwaters to international tourism hotspots. But they were also the catalyst for regeneration of derelict areas and left a huge infrastructure legacy in their wake from public transport systems to iconic architecture. Yes, it’s true that some have under-delivered. Hanover in 2000 only saw half its expected 40 million visitors and the privately funded New Orleans Expo in 1984 went bankrupt. It is the world’s biggest place-branding and place-shaping opportunity, but there’s no automatic dividend. It’s an asset that has to be sweated to succeed. 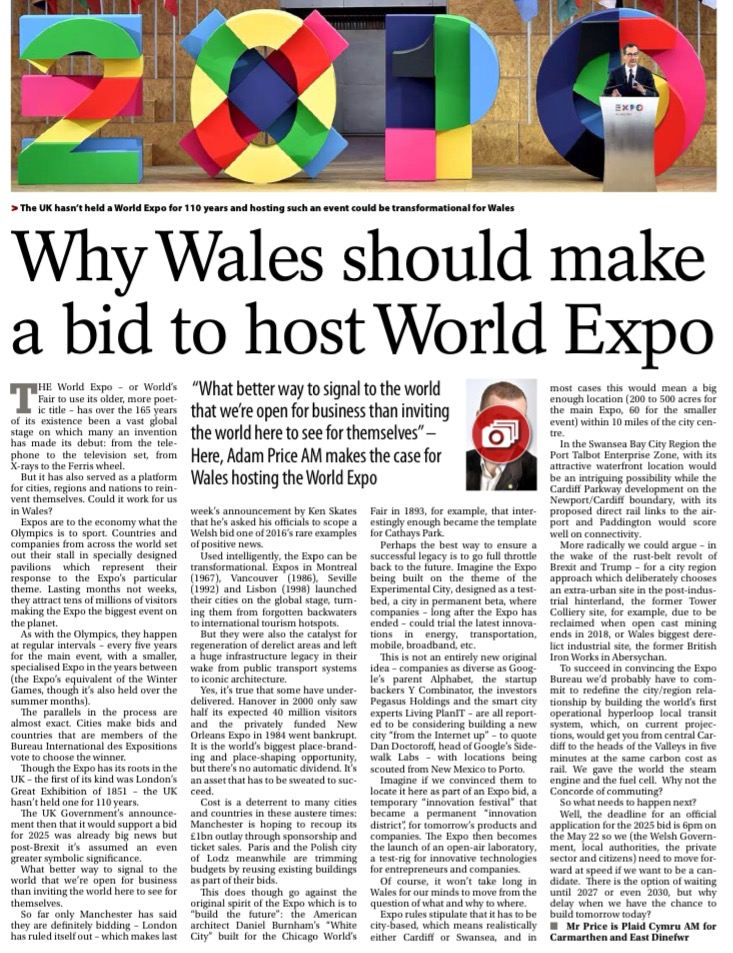 Cost is a deterrent to many cities and countries in these austere times: Manchester is hoping to recoup its £1 billion outlay through sponsorship and ticket sales. Paris and the Polish city of Lodz meanwhile are trimming budgets by reusing existing buildings as part of their bids. This does though go against the original spirit of the Expo which is to “build the future”: the American architect Daniel Burnham’s “White City” built for the Chicago World’s Fair in 1893, for example, that interestingly enough became the template for Cathays Park.

Perhaps the best way to ensure a successful legacy is to go full throttle back to the future. Imagine the Expo being built on the theme of the Experimental City, designed as a test-bed, a city in permanent beta, where companies – long after the Expo has ended – could trial the latest innovations in energy, transportation, mobile, broadband, etc. This is not an entirely original idea – companies as diverse as Google’s parent Alphabet, the startup backers Y Combinator, the investors Pegasus Holdings and the smart city experts Living PlanIT – are all reported to be considering building a new city “from the Internet up” – to quote Dan Doctoroff, head of Google’s Sidewalk Labs – with locations being scouted from New Mexico to Porto. Imagine if we convinced them to locate it here as part of an Expo bid, a temporary “innovation festival” that became a permanent “innovation district”, a petri dish for tomorrow’s products and companies. The Expo then becomes the launch of an open-air laboratory, a test-rig for innovative technologies for entrepreneurs and companies worldwide.

Of course, it won’t take long in Wales for our minds to move from the question of what and why to where. Expo rules stipulate – as in the case of the Olympics and the Commonwealth Games – that it has to be city-based, which means realistically either Cardiff or Swansea, and in most cases this would mean a big enough location (200 to 500 acres for the main Expo, 60 for the smaller event) within 10 miles of the city centre. In the Swansea Bay City Region the Port Talbot Enterprise Zone, with its attractive waterfront location would be an intriguing possibility while the Cardiff Parkway development on the Newport/Cardiff boundary, with its proposed direct rail links to the Airport and Paddington would score well on connectivity.

More radically we could argue – in the wake of the rust-belt revolt of Brexit and Trump – for a city region approach which deliberately chooses an extra-urban site in the post-industrial hinterland, the former Tower Colliery site, for example, due to be reclaimed when open cast mining ends in 2018, or Wales biggest derelict industrial site, the former British Iron Works in Abersychan. To succeed in convincing the Expo Bureau we’d probably have to commit to redefine the city/region relationship by building the world’s first operational hyperloop local transit system, which, on current projections, would get you from central Cardiff to the heads of the Valleys in five minutes at the same carbon cost as rail. We gave the world the locomotive and the fuel cell. Why not the Concorde of commuting?

So what needs to happen next? Well, the deadline for an official application for the 2025 bid is 6pm on the 22nd May next year so we (the Welsh Government, local authorities, the private sector and citizens) need to move forward at speed if we want to be a candidate.

There is the option of waiting until 2027 or even 2030, but why delay when we have the chance to build tomorrow today?

This article first appeared in the Western Mail on Tuesday 6th December 2016.