Adam Price has today stated that Hywel Dda University Health Board (UHB) should receive a targeted intervention from the Welsh Government.

The former Member of Parliament and Plaid Cymru's candidate to the National Assembly has said some of the performance levels across Hywel Dda UHB, in a number of different specialities, had declined over the last year, prompting his call for further action from the Welsh Government.

In March 2014, the Welsh Government's Minister for Health and Social Services launched the Joint Escalation and Intervention Arrangements. These arrangements see the Wales Audit Office, Healthcare Inspectorate for Wales and Welsh Government meet twice a year to discuss the overall position of each health board and NHS trust.

Information and intelligence is considered to help identify any issues within the health boards. There is a four-stage framework for escalations and intervention:

At the end of March 2015 Hywel Dda University Health Board (Hywel Dda UHB) was notified that it had been escalated from tier one (routine arrangements) to tier two (enhanced monitoring). The reasons for this included:

In correspondence from the Director General of NHS Wales which notified Hywel Dda UHB Chief Executive, Steve Moore, of the intervention, it was noted that Mr Moore had himself expressed concerns at the Health Board, and had himself requested escalation.

Of the 10 Health Boards and NHS Trusts in Wales, five are currently on routine arrangements, four are on enhanced monitoring and one (Betsi Cadwaladr UHB) is in special measures. 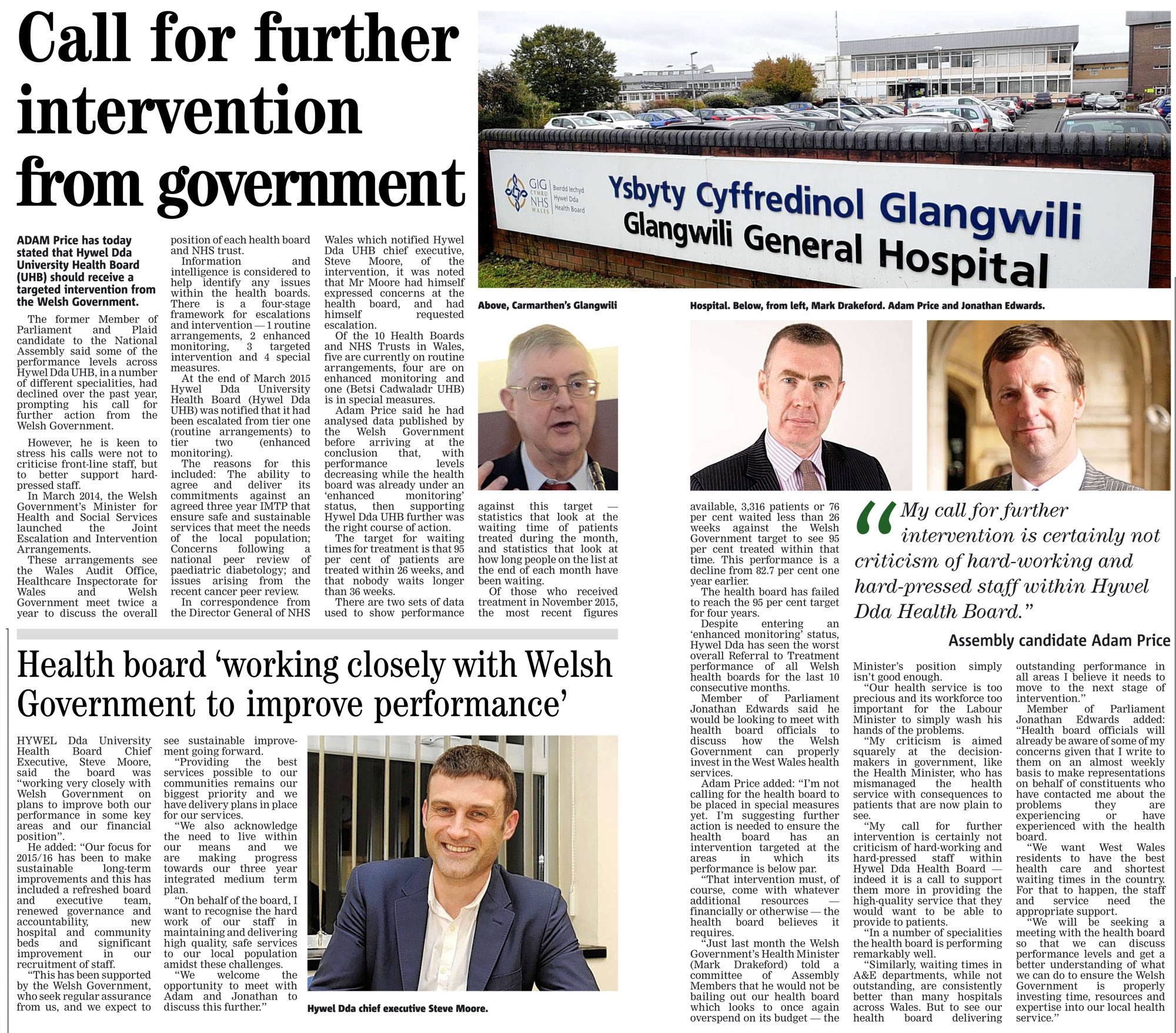 Adam Price said he had analysed a suite of data published by the Welsh Government before arriving at the conclusion that, with performance levels decreasing whilst the health board was already under an 'enhanced monitoring' status, then supporting Hywel Dda UHB further was the right course of action.

The target for waiting times for treatment is that 95% of patients are treated within 26 weeks, and that nobody waits longer than 36 weeks. There are two sets of data used to show performance against this target;

Of those who received treatment in November 2015 (for which the latest available figures relate) 3,316 patients or 76% waited less than 26 weeks against the Welsh Government target to see 95% treated within that time. This performance is a decline from 82.7% one year earlier. The health board has failed to reach the 95% target for four years.

Despite entering an 'enhanced monitoring' status Hywel Dda has seen the worst overall Referral to Treatment performance of all Welsh health boards for the last 10 consecutive months.

Looking deeper into some specialities, Adam Price notes that:

Adam Price stressed that his call was to better support hard-pressed health board staff and any criticism was aimed at decision-makers in government. He said the Labour Minister cannot wash his hands of responsibility.

Member of Parliament Jonathan Edwards said he would be looking to meet with health board officials to discuss how the Welsh Government can properly invest in the west wales health services.

"Just last month the Welsh Government's Health Minister told a committee of Assembly Members that he would not be bailing out our health board which looks to once again overspend on its budget – the Minister's position simply isn't good enough. Our health service is too precious and its workforce too important for the Labour Minister to simply wash his hands of the problems.

"My criticism is aimed squarely at the decision-makers in government, like the Health Minister, who has mismanaged the health service with consequences to patients that are now plain to see. My call for further intervention is certainly not criticism of hard-working and hard-pressed staff within Hywel Dda Health Board - indeed it is a call to support them more in providing the high-quality service that they would want to be able to provide to patients.

"In a number of specialities the health board is performing remarkably well. Similarly, waiting times in A&E departments, whilst not outstanding, are consistently better than many hospitals across Wales. But to see our health board delivering outstanding performance in all areas I believe it needs to move to the next stage of intervention."

"Health board officials will already be aware of some of my concerns given that I write to them on an almost weekly basis to make representations on behalf of constituents who have contacted me about the problems they are experiencing or have experienced with the health board.

"We want west Wales residents to have the best health care and shortest waiting times in the country. For that to happen, the staff and service need the appropriate support.

"We will be seeking a meeting with the health board so that we can discuss performance levels and get a better understanding of what we can do to ensure the Welsh Government is properly investing time, resources and expertise into our local health service."