This article by Adam Price - Plaid Cymru's Shadow Minister for Finance and the Treasury, first appeared in the Sunday Times on March 27, 2016.

Like some modern morality tale on the theme of globalisation, a vote next Tuesday by the eleven-strong board of Tata Steel in a city 4,000 miles away may have more immediate effect on the future of the Welsh economy than another vote a month later with an electorate of 2 million. A rescue plan will be presented involving a two-year turnaround of the ailing Port Talbot plant, with the goal of achieving break-even from a current annual loss of some £300m. Success in achieving that exacting target would be the trigger for another plan, drawn up by consultants but put on ice amid the current crisis, to invest the estimated £1bn needed to achieve longer-term competitiveness. The whole of Wales has to hope that the local management and workforce that have worked as one on the plan prevail.

Some of the omens have not been good. Tata Steel Europe’s boss Klaus Köhler resigned last month and his replacement is no longer represented on the main board. Rumour has it that the patience of Tata’s senior leadership has worn thin. If the decision goes the wrong way for Wales, it’s unlikely that Tata would want to make an incendiary announcement in the run-up not just to an Assembly election but also the EU Referendum. The aviation to autos and software to steel conglomerate desperately wants the UK to remain in the EU and wouldn’t want to risk adding fuel to the fire of the Out campaign. 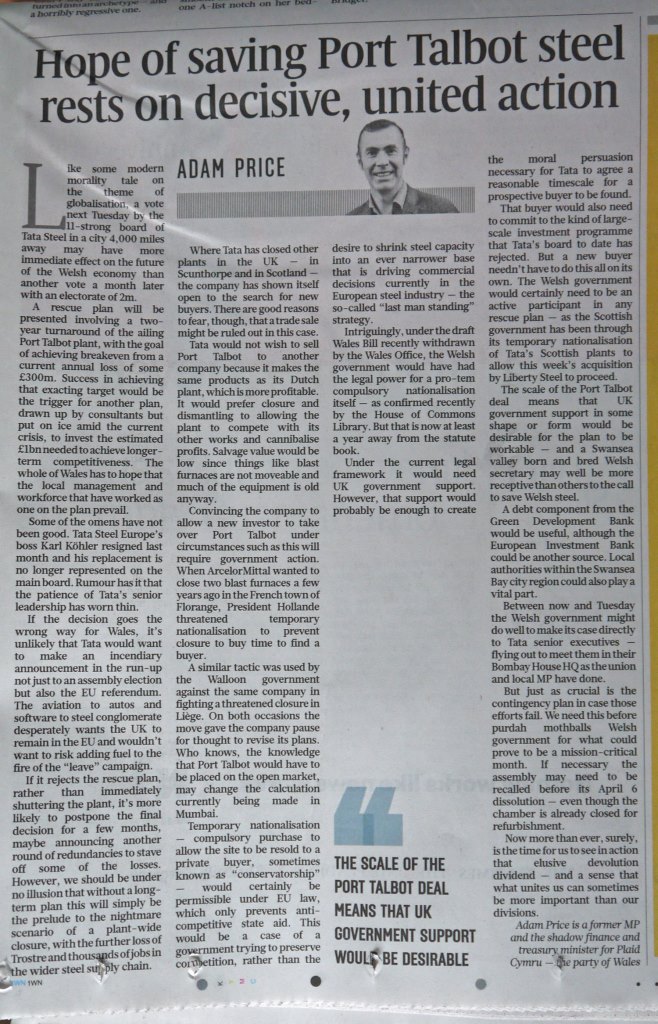 If it rejects the rescue plan, rather than immediately shuttering the plant it’s more likely to postpone the final decision for a few months, maybe announcing another round of redundancies to stave some of the losses. However, we should be under no illusion that without a long-term plan this will simply be the prelude to the nightmare scenario of a plant-wide closure, with the further loss of Trostre and thousands of jobs in the wider steel supply chain.

Where Tata has closed other plants in the UK – in Scunthorpe and in Scotland - the company has shown itself open to the search for new buyers. There are good reasons to fear though that a trade sale might be ruled out in this case. Tata would not wish to sell Port Talbot to another company because it makes the same products as their Dutch plant, which is more profitable. They would prefer closure and dismantling to allowing the plant to compete with their other works and cannibalise profits. Salvage value would be low since things like blast furnaces are not moveable and much of the equipment is old anyway.

Convincing the company to allow a new investor to take over Port Talbot under circumstances such as this will require Government action. When Arcelor Mittal wanted to close two blast furnaces a few years ago in the French town of Florange, President Hollande threatened temporary nationalisation to prevent closure to buy time to find a buyer. A similar tactic was used by the Walloon Govt against the same company in fighting a threatened closure in Liège. On both occasions the move gave the company pause for thought to revise their plans. Who knows, the knowledge that Port Talbot would have to be placed on the open market, may change the calculation currently being made in Mumbai.

Temporary nationalisation - compulsory purchase to allow the site to be re-sold to a private buyer, sometimes known as ‘conservatorship’ – would certainly be permissible under EU law which only prevents anti-competitive State Aid. This would be a case of Government trying to preserve competition, rather than the desire to shrink steel capacity into an ever narrower base that is driving commercial decisions currently in the European steel industry – the so-called ‘last man standing’ strategy.

Intriguingly, under the Draft Wales Bill recently withdrawn by the Wales Office, the Welsh Government would have had the legal power for a pro-tem compulsory nationalisation itself – as confirmed recently by the House of Commons Library. But that is now at least a year away from the Statute Book. Under the current legal framework it would need UK Government support. However that support would probably be enough to create the moral persuasion necessary for Tata to agree a reasonable timescale for a prospective buyer to be found.

That buyer would also need to commit to the kind of large-scale investment programme which Tata’s Board to date have demurred. But a new buyer needn’t have to do this all on its own. The Welsh Government would certainly need to be an active participant in any rescue plan – as the Scottish Government has been through its temporary nationalisation of Tata’s Scottish plants to allow this week’s acquisition by Liberty Steel to proceed. The scale of the Port Talbot deal means that UK Government support in some shape or form would be desirable for the plan to be workable – and a Swansea Valley born and bred Welsh Secretary may well be more receptive than others to the call to save Welsh Steel. A debt component from the Green Development Bank would be useful, although the European Investment Bank could be another source. Local authorities within the Swansea Bay City Region could also play a vital part.

Between now and Tuesday the Welsh Government might do well to make its case directly to Tata Senior Executives – flying out to meet them in their Bombay House HQ as the union and local MP have done. But just as crucial is the contingency plan in case those efforts fail. We need this before purdah mothballs Welsh Government for what could prove to be a mission-critical month. If necessary the Assembly may need to be recalled before its April 6th dissolution – even though the Chamber is already closed for refurbishment. Now more than ever, surely, is the time for us to see in action that elusive devolution dividend – and a sense that what unites us can sometimes be more important than our divisions.