In a Western Mail essay piece published on Monday 28th December, Adam Price looks at the pros and cons of the 'village-life' nature of public life in Wales.  He says it means communication is good but also that there is a risk of unchallenged 'groupthink'.

When the famous six degrees of separation experiment was tried in Wales a few years ago, it found the average number of ‘jumps’ to link two people in Wales was just three.

“Small, connected country” is not just some national myth, it’s empirically grounded. We even call our First Ministers by first name (except the First Secretary, who will always be known as Alun Michael).

The village-like nature of public life in Wales has considerable advantages. It’s much easier, potentially, to make decisions as you can get all the relevant stakeholders together in an atmosphere of trust

It’s what organisational experts call “getting the system in the room” – and in Wales, we can do it literally, at meetings that used to be in the Metropole in Llandrindod Wells but tend these days to be held at the Celtic Manor.

So information flows more quickly, and the glue of social connection means bonds are tight. In the economic crisis Wales was able to move quickly – government, unions and employers in lock-step – with the ProAct and ReAct schemes.

The fall in output in Wales during the Great Recession in the last decade was about a third of that across the whole of the UK.

That innate sense of solidarity forged in the searing fire of the pit disaster has perhaps left its mark even in modern Wales.

When Labour and Plaid got together in a “One Wales” government in 2007 – unthinkable in Scotland or England, though clearly not in Belfast – this resonated with some deeply help truth in Welsh consciousness, that what unites us is ultimately more important and more enduring than what divides us.

Cymru, means, after all, compatriot. 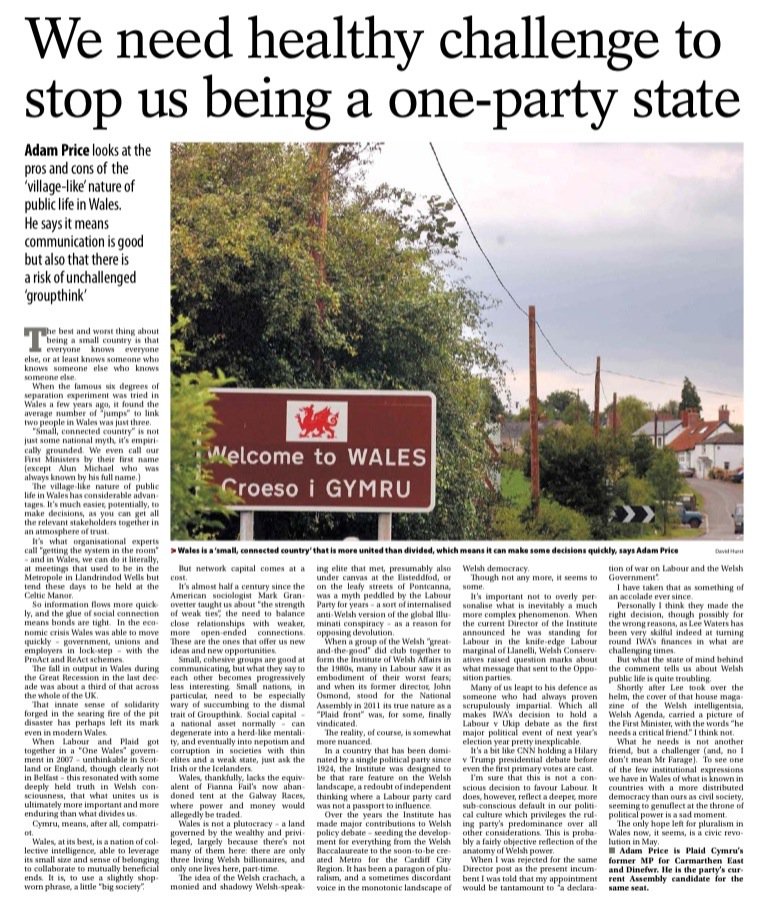 Wales, at its best, is a nation of collective intelligence, able to leverage its small size and sense of belonging to collaborate to mutually beneficial ends. It is, to use a slightly shop-worn phrase, a little “big society”.

But network capital comes at a cost.

It’s almost half a century since the American sociologist Mark Granovetter taught us about “the strength of weak ties”, the need to balance close relationships with weaker, more open-ended connections. These are the ones that offer us new ideas and new opportunities.

Small, cohesive groups are good at communicating, but what they say to each other becomes progressively less interesting. Small nations, in particular, need to be especially wary of succumbing to the dismal trait of Groupthink. Social capital – a national asset normally – can degenerate into a herd-like mentality, and eventually into nepotism and corruption in societies with thin elites and a weak state, just ask the Irish or the Icelanders.

Wales, thankfully, lacks the equivalent of Fianna Fail’s now abandoned tent at the Galway Races, where power and money would allegedly be traded.

Wales is not a plutocracy – a land governed by the wealthy and privileged, largely because there’s not many of them here: there are only three living Welsh billionaires, and only one of them lives here, part-time.

The idea of the Welsh crachach, a monied and shadowy Welsh-speaking elite that met, presumably also under canvass at the Eisteddfod, or on the leafy streets of Pontcanna, was a myth peddled by the Labour Party for years – a sort of internalised anti-Welsh version of the global Illuminati conspiracy – as a reason for opposing devolution.

When a group of the Welsh “great-and-the-good” did club together to form the Institute of Welsh Affairs in the 1980s, many in Labour saw it as embodiment of their worst fears; and when its former director, John Osmond, stood for the National Assembly in 2011 its true nature as a Plaid front was, for some, finally vindicated.

The reality, of course, is somewhat more nuanced.

In a country that has been dominated by a single political party since 1924, the Institute was designed to be that rare feature on the Welsh landscape, a redoubt of independent thinking where a Labour party card was not a passport to influence.

Over the years the Institute has made major contributions to Welsh policy debate – seeding the development for everything from the Welsh Baccalaureate to the soon-to-be created Metro for the Cardiff City Region. It has been a paragon of pluralism, and a sometimes discordant voice in the monotonic landscape of Welsh democracy.

Though not any more it seems to some.

It’s important not to overly personalise what is inevitably a much more complex phenomenon. When the current Director of the Institute announced he was standing for Labour in the knife-edge Labour marginal of Llanelli, Welsh Conservatives raised question marks about what message that sent to the Opposition parties.

Many of us leapt to his defence as someone who had always proven scrupulously impartial. Which all makes IWA’s decision to hold a Labour v Ukip debate as the first major political event of next year’s election year pretty inexplicable.

It’s a bit like CNN holding a Hilary v. Trump presidential debate before even the first primary votes are cast.

I’m sure that this is not a conscious decision to favour Labour. It does, however, reflect a deeper more sub-conscious default in our political culture which privileges the ruling party’s predominance over all other considerations. This is probably a fairly objectively reflection of the anatomy of Welsh power.

When I was rejected for the same director post as the present incumbent I was told that my appointment would be tantamount to “a declaration of war on Labour and the Welsh Government”.

I have taken that as something of an accolade ever since.

Personally I think they made the right decision, though, possibly for the wrong reasons, as Lee Waters has been very skillful indeed at turning round IWA’s finances in what are challenging times for any organisation.

But what the state of mind behind the comment tells us about Welsh public life is quite troubling.

Shortly after Lee took over the helm, the cover of that house magazine of the Welsh intelligentsia, Welsh Agenda, carried a picture of the First Minister, with the words “he needs a critical friend.” I think not.

What he needs, is not another friend, but a challenger – (and, no I don’t mean Mr Farage). To see one of the few institutional expressions we have in Wales of what is known in countries with a more distributed democracy than ours as civil society, seeming to genuflect at the throne of political power is a sad moment.

The only hope left for pluralism in Wales now it seems is a civic revolution in May."

Adam Price is the former Member of Parliament for Carmarthen East and Dinefwr, and his party's candidate to contest the National Assembly Election in May 2016 for the same constituency.