Jonathan once again raises Helicopter in the House of Commons 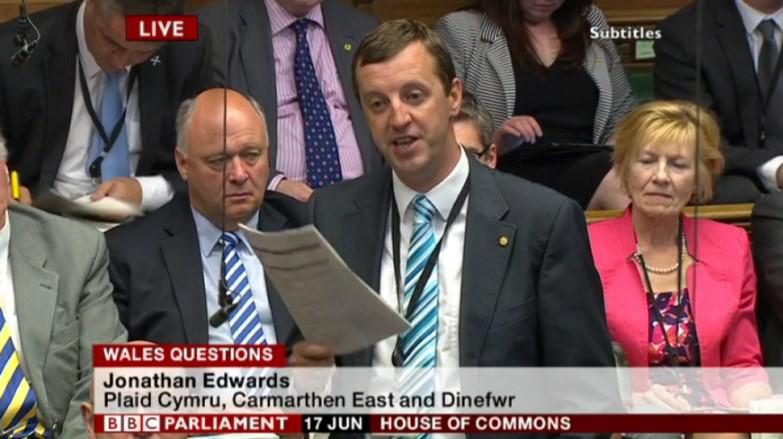 Jonathan Edwards (Carmarthen East and Dinefwr) (PC): What plans he has for the future of air police services in the Dyfed Powys area; and if he will make a statement.

The Parliamentary Under-Secretary of State for Wales (Alun Cairns): The National Police Air Service plays an important role in keeping the people of England and Wales safe. Operational capability decisions regarding the provision of police air support remain the responsibility of the strategic board.

Jonathan Edwards: Maps produced by NPAS show that about half of the Dyfed Powys police force area will fall within 30 minutes’ flying time from a helicopter base, despite NPAS wanting to reach 90% of the population of Wales and England within 20 minutes. Is the Minister content with this extension of response times and with the fact that parts of Dyfed Powys will still not be reachable even within the extended 30-minute timescale?

Alun Cairns: The hon. Gentleman has a strong record in scrutinising such changes—the Westminster Hall debate just last week was testimony to that—but I also pay tribute to the police and crime commissioner, who is seeking to improve cover and save money at the same time. Any money saved, of course, will create an opportunity to support more officers on the beat.

Jonathan Edwards: Anyone looking at the proposed NPAS division will come to the conclusion that the residents of Dyfed Powys will receive a second-class service compared with the dedicated police helicopter service currently enjoyed. Considering that the commissioner is powerless to act, will the Minister join me in calling on the Home Office to hold an urgent review into the situation in Wales, and Dyfed Powys in particular, as it is doing in the north-east of England?

Alun Cairns: I encourage the hon. Gentleman to meet the police and crime commissioner, who has said he is more than happy to meet him to discuss such issues. There is an opportunity, however, not only to save money but to improve cover. At the moment, the station he talks about operates limited hours, whereas the NPAS proposals would operate 24-hour cover and also provide access to more helicopters and added resilience.