Three years ago I made a keynote speech at the National Eisteddfod on the injustice of Welsh taxpayers paying for High Speed rail (HS2), an England-only project when Wales, unlike Scotland and Northern Ireland, would not receive full Barnett consequentials. 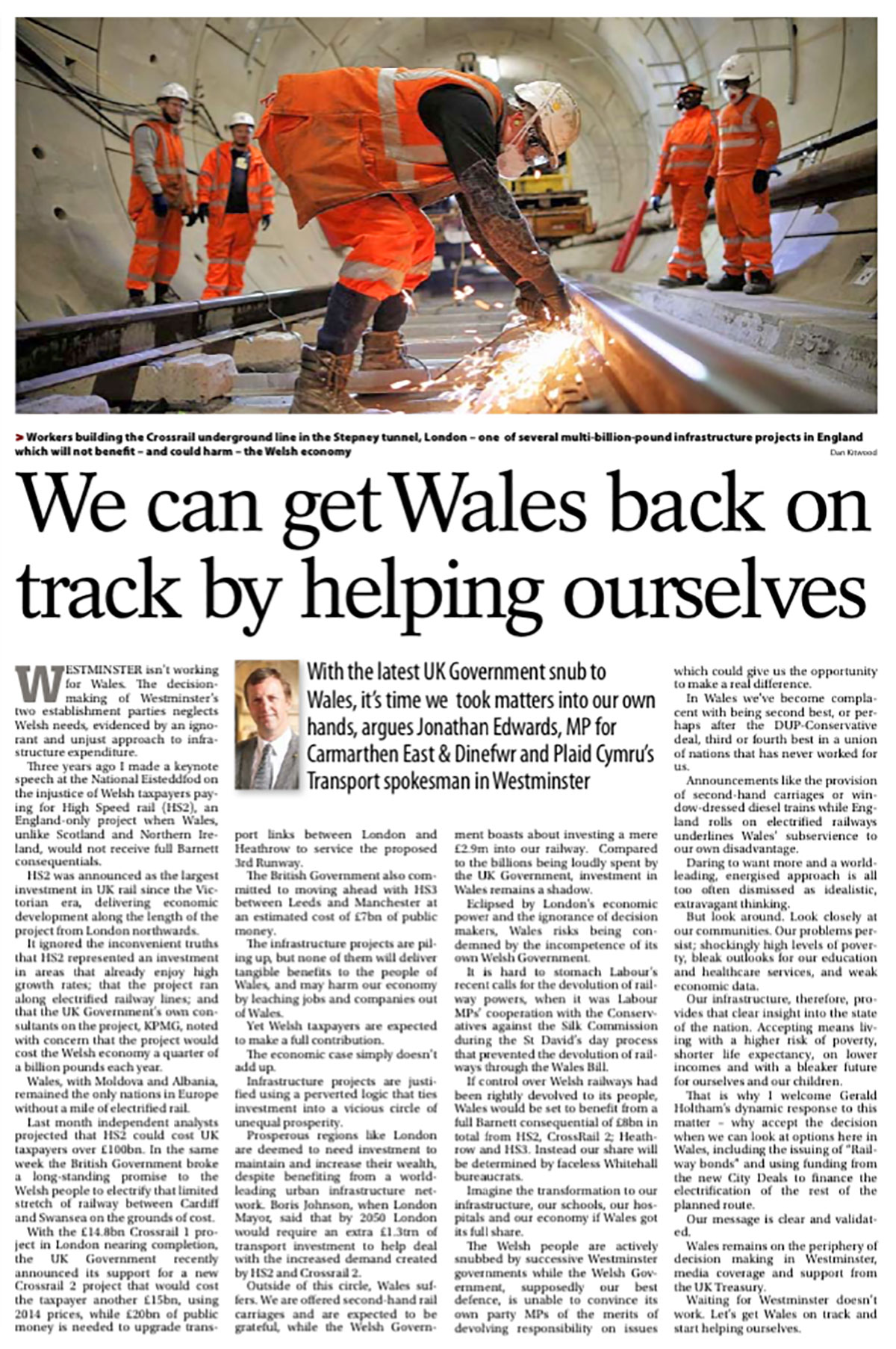 HS2 was announced as the largest investment in UK rail since the Victorian era, delivering economic development along the length of the project from London northwards. It ignored the inconvenient truths that HS2 represented an investment in areas that already enjoy high growth rates; that the project ran along electrified railway lines; and that the UK Government’s own consultants on the project, KPMG, noted with concern that the project would cost the Welsh economy a quarter of a billion pounds each year. Wales, with Moldova and Albania, remained the only nations in Europe without a mile of electrified rail.

Last month independent analysts projected that HS2 could cost UK taxpayers over £100bn. In the same week the British Government broke a long-standing promise to the Welsh people to electrify that limited stretch of railway between Cardiff and Swansea on the grounds of cost. With the £14.8 billion Crossrail 1 project in London nearing completion, the UK Government recently announced its support for a new Crossrail 2 project that would cost the taxpayer another £15 billion, using 2014 prices, while £20bn of public money is needed to upgrade transport links between London and Heathrow to service the proposed 3rd Runway. The British Government also committed to moving ahead with HS3 between Leeds and Manchester at an estimated cost of £7bn of public money.

The infrastructure projects are piling up, but none of them will deliver tangible benefits to the people of Wales, and may harm our economy by leaching jobs and companies out of Wales. Yet Welsh taxpayers are expected to make a full contribution.

The economic case simply doesn’t add up. Infrastructure projects are justified using a perverted logic that ties investment into a vicious circle of unequal prosperity. Prosperous regions like London are deemed to need investment to maintain and increase their wealth, despite benefitting from a world-leading urban infrastructure network. Boris Johnson when London Mayor said that by 2050 London would require an extra £1.3 trillion of transport investment to help deal with the increased demand created by HS2 and Crossrail 2.

Outside of this circle, Wales suffers. We are offered second-hand rail carriages and are expected to be grateful, while the Welsh Government boasts about investing a mere £2.9 million into our railway. Compared to the billions being loudly spent by the UK Government, investment in Wales remains a shadow.

Eclipsed by London’s economic power and the ignorance of decision makers, Wales risks being condemned by the incompetence of its own Welsh Government. It is hard to stomach Labour’s recent calls for the devolution of railway powers, when it was Labour MPs’ cooperation with the Conservatives against the Silk Commission during the St David’s day process that prevented the devolution of railways through the Wales Bill. If control over Welsh railways had been rightly devolved to its people, Wales would be set to benefit from a full Barnett consequential of £8billion in total from HS2, CrossRail 2; Heathrow and HS3. Instead our share will be determined by faceless Whitehall bureaucrats.

Imagine the transformation to our infrastructure, our schools, our hospitals and our economy if Wales got its full share.
The Welsh people are actively snubbed by successive Westminster governments while the Welsh Government, supposedly our best defence, is unable to convince its own party MPs of the merits of devolving responsibility on issues which could give us the opportunity to make a real difference.

In Wales we’ve become complacent with being second best, or perhaps after the DUP-Conservative deal, third or fourth best in a union of nations that has never worked for us. Announcements like the provision of second-hand carriages or window-dressed diesel trains while England rolls on electrified railways underlines Wales’ subservience to our own disadvantage.

Daring to want more and a world-leading, energised approach is all too often dismissed as idealistic, extravagant thinking.

But look around. Look closely at our communities. Our problems persist; shockingly high levels of poverty, bleak outlooks for our education and health care services, and weak economic data. Our infrastructure therefore provides that clear insight into the state of the nation. Accepting means living with a higher risk of poverty, shorter life expectancy, on lower incomes and with a bleaker future for ourselves and our children.

That is why I welcome Gerald Holtham’s dynamic response to this matter – why accept the decision when we can look at options here in Wales, including the issuing of ‘Railway bonds’ and using funding from the new City Deals to finance the electrification of the rest of the planned route.

Our message is clear and validated. Wales remains on the periphery of decision making in Westminster, media coverage and support from the UK Treasury.

Waiting for Westminster doesn’t work. Let’s get Wales on track and start helping ourselves.