Debate on the UK Economy

The Chancellor is known for being a very political operator. Economic historians will pay tribute to the manner in which, following the 2010 election, he successfully framed the economic debate by focusing on the deficit. This enabled the Conservative party to challenge the economic competence of its predecessors while also allowing it the political space to pursue its ideological obsession with reducing the size of the state.

If you would prefer to listen to this speech, click here:

The Chancellor is known for being a very political operator. Economic historians will pay tribute to the manner in which, following the 2010 election, he successfully framed the economic debate by focusing on the deficit. This enabled the Conservative party to challenge the economic competence of its predecessors while also allowing it the political space to pursue its ideological obsession with reducing the size of the state.  The Chancellor has endeavoured to portray the economic recovery as one made in No. 11 Downing street. This ignores the fact that the last recession was the longest in economic history and was most certainly exacerbated by the deep contraction in public spending at the beginning of the last Parliament.

What is often conveniently ignored in debates such as this is the role of monetary policy. As I have said in the past, the UK economy continues to be on the life support of ultra-loose monetary policy. Central bank interest rates continue to be at an historically low level of 0.5% and the economy has been kept afloat with £375 billion-worth of quantitative easing. One of the perverse side-effects of QE has been to increase wealth inequalities as assets increase in value, a theme I will return to later. Monetary policy by the central bank filled the void left by the Treasury’s fiscal cuts, but it has led to a greater imbalance in the UK economy, where economic performance is now even more reliant on consumer spending, as opposed to public investment, exports and business investment. According to the House of Commons Library, household consumption now accounts for over 60% of the UK economy, and it should be an urgent Treasury priority to rebalance and boost business investment and exports. 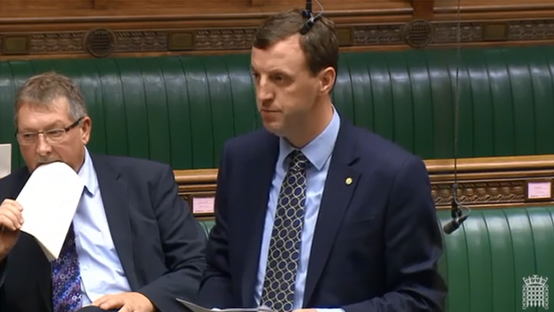 The Bank for International Settlements—or, to give it its other name, the central bank of central banks—has warned that the danger with the current ultra-loose monetary policy is that the western economies will become hooked on low interest rates and that any normalisation will lead to significant economic headwinds. In other words, there is a danger that the abnormal in monetary policy will become the new norm. The obvious consequence, if there is no normalisation of monetary policy, is that the central bank will be impotent when the next downturn comes. Let us remember that, since the second world war, the average economic cycle has lasted between seven and 10 years, which means that we might be due another downturn very soon.

I am grateful to the hon. Gentleman for that intervention, because I was about to make the point that the Treasury needs to be very careful with our fiscal policy.

A study by Credit Suisse shows that since the turn of the century the UK has been alone among the G7 members in seeing its wealth inequality grow. Even the International Monetary Fund argues that reducing wealth inequalities is a key economic growth strategy. Unfortunately, the recent Budget, with its assault on tax credits, is likely to lead to an increase in income inequalities and wealth inequalities. Considering the pressure faced by the public finances and the cuts being imposed on support for the poorest in society, we oppose the intention to end inheritance tax on family homes worth up to £1 million. Inheritance tax raised more than £4 billion in 2015-16 and it should be an important element of a more balanced approach to fiscal consolidation, as opposed to the Tory obsession with cuts. The decision to scrap maintenance grants for the poorest students at the same time as introducing the regressive changes to inheritance tax will not solve the major social mobility problems in the UK.

The Chancellor has eased what the Office for Budget Responsibility had described as a “rollercoaster” fiscal policy, whereby cuts would be front-loaded, with a spending splurge at the end of the political cycle. However, spending on public services by the end of this Parliament as a percentage of GDP will be at its lowest level since 1964-65, according to the OBR.

The economy faces several major challenges. The first involves the grotesque geographical wealth inequalities within the British state and the over-reliance on London and the south-east of England. This problem has built up over successive Governments, to the degree that the UK is now by far the most unequal state in the European Union. Regrettably, the communities I represent are at the bottom of the pile. To be fair, the current UK Government at least acknowledge that there is an issue. Their response has been to devolve significant taxation powers to Northern Ireland and Scotland, which have received powers over corporation tax and full income tax powers respectively. Significant powers are also being devolved to English city regions.

In the case of Wales, however, we are getting minor taxes and an income tax sharing arrangement pending a referendum many years down the line. The key question that the UK Government need to answer is this: what economic disadvantage do they envisage Wales facing as a result of our second-class settlement? Direct economic control from Westminster is clearly failing my country. We deserve equal respect with the other constituent parts of the UK and we need the same job creation levers that are being devolved elsewhere.

Secondly, the UK faces major challenges in relation to chronic levels of business investment and productivity. The Treasury Budget briefing note itself acknowledges that business investment levels in the UK are the worst of all major economies apart from Italy. To address this, the Treasury needs to return infrastructure investment to pre-recession levels, as advocated by the IMF. That would equate to around an extra 1% of GDP—£19 billion of extra investment across the UK with a share for Wales of around £1 billion. That is what we will be looking for when the Chancellor stands up next week to deliver his comprehensive spending review in his autumn statement.