‘Decisions based on politics, not economics’ - Jonathan responds to the Budget

George Osborne has delivered a budget based on politics instead of economics – that was the position of local MP Jonathan Edwards who has responded to the Chancellor’s Budget statement today.

Branding it as “another poor report card” for the Chancellor, Jonathan Edwards did welcome elements of the budget but was heavily critical of the way in which the Westminster Government is treating Wales and her citizens.

The overarching criticism from the Plaid Cymru MP was the decision of the Chancellor to meet his self-branded ‘fiscal mandate’ of a budget surplus by 2019/20 – a move supported by Labour MPs which Jonathan Edwards describes as an “arbitrary and unnecessary target resulting in cruel and damaging social security decisions based on politics not economics.” 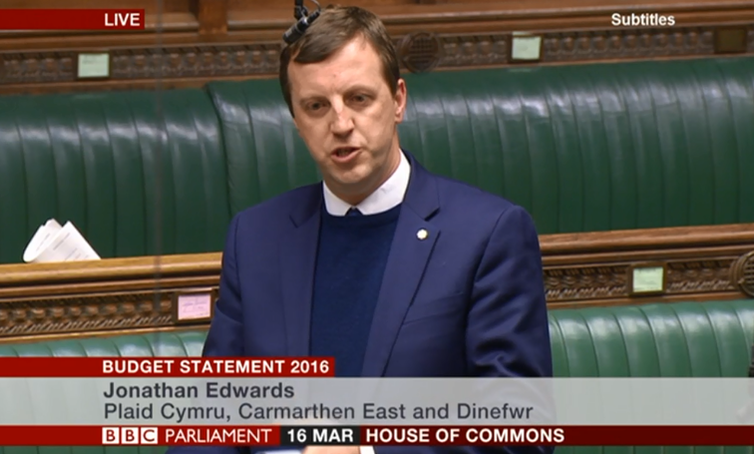 Addressing some of the headline announcements, Jonathan Edwards MP said:

“Reducing Severn bridge tolls is a welcome first step, but when they return to public ownership in 2018 the Chancellor’s plans will still see us charged 3 times greater than the cost of bridge maintenance. That’s not a fair deal - that’s Wales still getting fleeced by Westminster. Plaid Cymu would work to scrap the bridge tolls altogether.

“The increase in personal tax allowance to £11,500 is a good move, but the Chancellor’s plan to significantly increase the threshold for those paying a higher rate of taxation is poorly thought out. Being more creative with national insurance contributions would better help both low and middle-income earners than the way Mr Osborne has set out.

“The business rate changes will, of course, apply to England only. But the Chancellor has today adopted the principle set out by Plaid Cymru some years ago; that is changing the rate relief threshold to lift small and medium firms out of paying business rates altogether. We have championed this for many years and I’m delighted the Conservative party has now recognised the importance of this Plaid Cymru policy.

“Similarly, a levy on sugary drinks is a policy Plaid Cymru has advocated since 2013. As is often the case, a period of ridicule from both the Tory and Labour parties sees them agreeing with Plaid Cymru policy in the end!

“What is utterly repulsive in this Tory budget, however, is the conscious decision to cut £4.5billion from the benefits and lifeline of our disabled citizens. The only reason for doing this is to meet the Chancellor’s own fiscal mandate – a self-inflicted law designed to deliver a budget surplus. It is nothing more than arbitrary and unnecessary target resulting in cruel and damaging social security decisions based on politics not economics. If this mandate didn’t exist, there would be no need for such sickening cuts to welfare. Labour MPs should hang their hands in shame for supporting this mandate last year.

“Overall the budget is another poor report card for the Chancellor who has presided over a catalogue of failures. Economic growth and productivity projections are down. UK exports are down. His targets to reduce the national deficit and debt have been missed yet again.

“This can change with political and economic renewal under a Plaid Cymru Welsh Government in May.”