Read Adam's contribution to the Assembly Debate on the Welsh Language Bill.

There is major work to be done to reach the objectives of the language strategy. There are gaps, certainly. And the promotion agency is one of them. Our party called for the creation of that kind of agency and it certainly was a strategic error to get rid of that element. But in trying to fill that vacuum, the risk is that we then weaken severely the part of the system relating to regulation, which it starting to deliver, to tell you the truth.

I was looking at figures for the progress that has been in terms of the annual report of the Welsh Language Commissioner. They’re amazing, to tell you the truth, given that the new system under the Measure has only been in existence for just over a year in full. That is, a Welsh language or bilingual greeting to 90 per cent of phone calls—a 31 per cent increase since the previous year. Fifty four receptions showing clearly that you’re welcome to use Welsh—an increase of 28 per cent over the previous year. And now 25 per cent of job advertisements saying that the Welsh language is essential—an increase of 9 per cent from the previous year.

We’re at risk of destroying the regulatory system as it starts to deliver. Well, it’s not me saying that, Alun. You said that you wanted a consensus. Well, the language consensus is being destroyed. Dyfodol yr Iaith and Cymdeithas yr Iaith both oppose, and even Huw Onllwyn, the former head of the Government’s language unit, is criticising some of the core suggestions that you have. Creating one body for promotion and regulation is an error, and they are different objectives and different activities that call for a different approach and different governance skills. 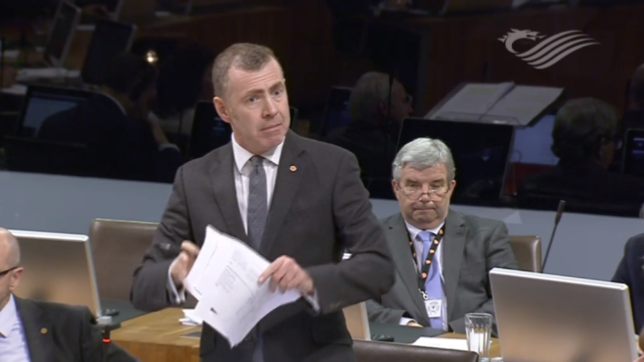 This question is central, in giving the power to the Government to impose the standards. That is a huge error, and Huw Onllwyn himself says, ‘I’m afraid that we’re on the verge of losing the service of an independent language champion’, and the Government will be managing everything. And in the context of rights, that is a great concern, because what happens if politics changes? The Minister talked of the fact that the position of the commissioner put the power all in the hands of one person. Well, in fact, there is a deputy commissioner and so forth, and there is a governance system, and of course there are staff and so forth. But, of course, what you’re suggesting, in giving the right to the Government to impose standards, is—. Well, at present, Alun, at present the standards come back to this Assembly. That is appropriate in a democratic system. What we’re talking about here is giving too much direct control to the Government, and the Government, of course, then facing conflicts of interest. They fund the bodies that are being regulated, and Ministers coming to them and saying, ‘Well, can we weaken the standards in that context?’

Having a system of independence through a commission or a collective body means that Welsh speakers have confidence that the rights are going to be protected. Sian Gwenllian said this is central: the right of the individual to complain directly to a commissioner, and to the office of the commissioner, which then conducts an investigation. Instead of that, complaining to the bodies that transgress, and that didn’t work very well for Welsh speakers, did it? That’s why we had to have the Welsh language Measure: in order to give assurance to the Welsh language speakers that we were going to have equal rights in Wales.

Alun, you and I were part of that campaign for rights for Welsh speakers, and we are now turning our backs on that, and it’s being withdrawn, there is a loss of momentum, and we’re diluting this. This is what your White Paper does represent. We need to start again. I agree with Jeremy Miles: why not have basic rights in legislation? That’s what’s delivered to other people in other contexts of disadvantage. Why doesn’t the Welsh Government show that kind of ambition and radicalism instead of this pitiful White Paper, which takes us a step back?